Material compatibility: When ammonia contains moisture, it is corrosive to copper. Therefore, copper and copper alloys cannot be used for the pipes and valves of the ammonia system. There are certain limitations in the selection of system equipment materials. Fluorine refrigerants have high chemical and thermal stability, and theoretically they are not corrosive to all metals. Interaction with water: the allowable water content of ammonia is less than 0.2%. Because ammonia is easily soluble in water, even if there is a trace amount of water, it will not appear "ice plug" like Freon, so it is necessary to dry the ammonia refrigeration system to the pipeline system. The requirements are not as strict as Freon. Freon is difficult to dissolve in water, so if there is water in the system, it is easy to cause ice clogging. Usually we have a filter drier in the system. Interaction with oil: At present, the lubricating oil of ammonia refrigeration system is mineral oil, which cannot be miscible with ammonia. Equipment such as oil separator and oil collector are usually installed to return the lubricating oil to the compressor through automatic or manual control. R404A is not miscible with mineral oil and alkylbenzene oil, but it can be miscible with polyester oil (POE). However, at high temperatures (around 50°C), there will be insoluble stratification, and R22 is also slightly soluble in lubricating oil. Therefore, large-scale fluorine refrigeration systems are usually equipped with oil and oil reservoirs. Take R404A as an example. The difference between the two compressors is only the refrigerant. Compare the cooling capacity of R717, R22 and R404A under the same evaporating temperature (-10°C), condensation temperature (45°C), liquid subcooling (0K) and suction superheating (10K). Ammonia has more advantages than fluorine in terms of cooling capacity, COP, and mass flow. However, the exhaust temperature of R717 is much higher than that of R22 and R404A, which will increase the configuration requirements of system components. Ammonia has a much larger refrigeration capacity per unit mass of fluorine, indicating that ammonia has a better refrigeration capacity. However, when the evaporation temperature reaches -33.33℃, the gauge pressure of ammonia is 0. In order to avoid the system working under negative pressure, ammonia is generally used For systems where the evaporation temperature is above -33.33°C. 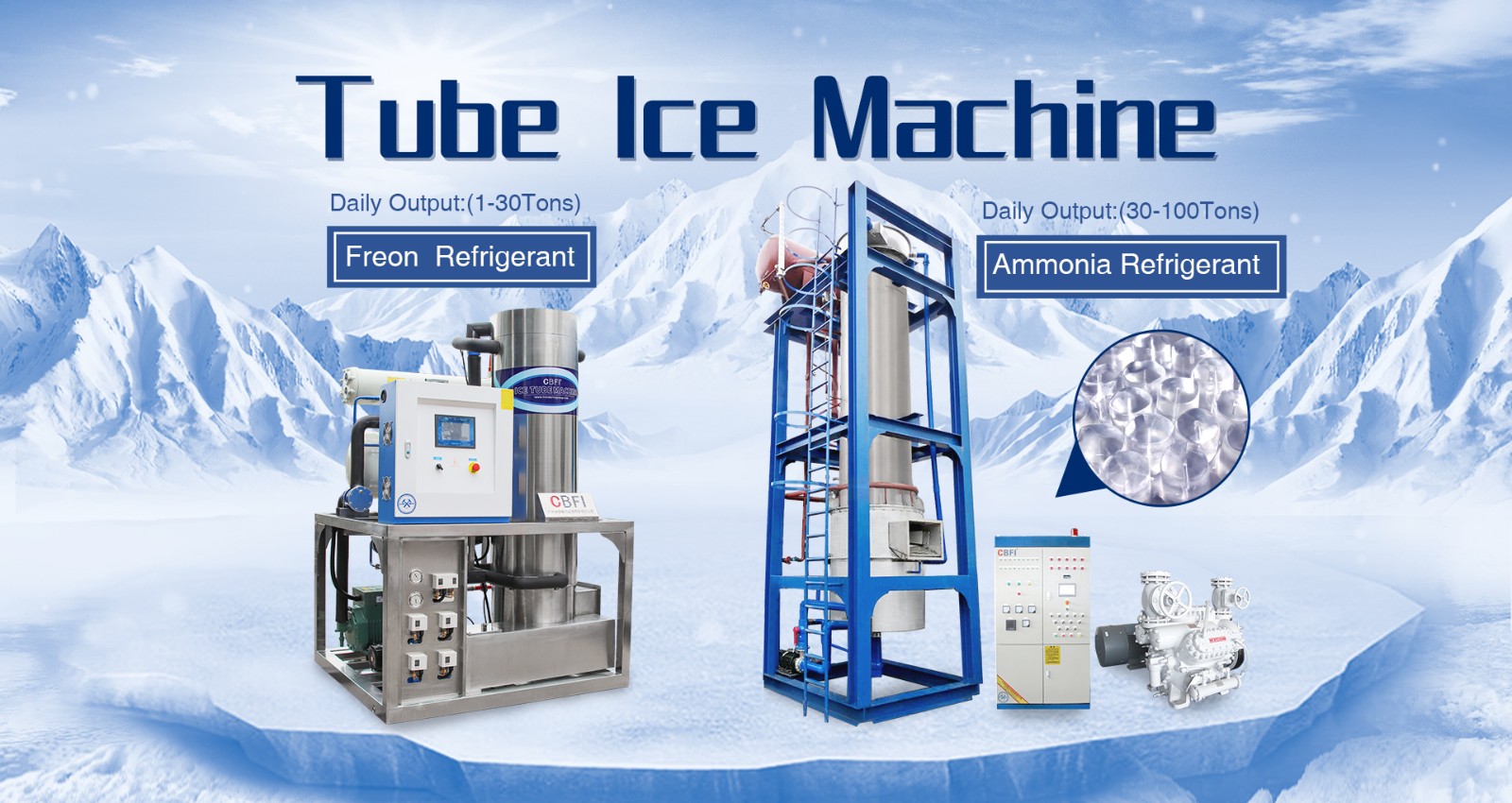 Tube ice machine Ammonia refrigeration is a pump-supply system. Since the mineral lubricating oil used in the ammonia refrigeration system is not miscible with ammonia, the ammonia system is indispensable for oil separators, oil collectors and other equipment to ensure the oil return of the system and reduce the system temperature, so that the ammonia The oil system is very complicated. These make the ammonia system huge, many auxiliary machines, complicated pipelines, many valves, complicated construction, and long construction period. The fluorine system has a compact structure, a small footprint, and few accessories. The configuration of the unit has been very complete, and most of it can be completed in the factory of the unit supplier.

The ammonia system includes a lot of equipment, mainly including compressors, evaporators, condensers, oil separators, high and low pressure storage tanks, intercoolers, recoolers, ammonia separators, low pressure circulation tanks, and emergency ammonia discharge devices. , Air vent, oil collector, ammonia pump and corresponding valve parts and bypass valve, etc., resulting in a lot of on-site installation workload. The main equipment of the fluorine system includes compressors, evaporators, condensers, oil separators, oil collectors, gas-liquid separators, liquid reservoirs and corresponding valves, etc. Generally, the fluorine system uses copper pipes or steel pipes, which is convenient to take over. , The pipe layout is simple, and the pipe consumption is less than that of the ammonia system. The cost of investment in ammonia and fluorine refrigeration equipment is at the same level of equipment quality and control methods. For small cold storage (compressors less than 50Hp), the price of fluorine is more than 10% lower than that of ammonia equipment. The prices of large and medium-sized cold storages are almost the same. If imported or imported domestically assembled fluorine refrigeration equipment is used, it is more than 30% cheaper than imported ammonia refrigeration equipment, but 20%-30% more expensive than domestic ammonia refrigeration equipment.

Because the valves of the domestic ammonia system are affected by valve material, processing equipment and processing technology, the leakage problem of the valves of the ammonia system is serious, and it is difficult to achieve a high degree of automatic control. Specialized personnel are required for 24-hour management (Note: There are also automated ammonia storages, but they are relatively few). The fluorine system is easy to realize highly integrated and relatively stable automatic control due to the mature products and stable performance of various components, and basically realizes the unattended operation of the system. Due to the hazards of Freon refrigerants to the atmospheric environment, the use of fluorine refrigeration has been restricted in recent years. Therefore, actively looking for more ideal refrigerants is the development direction of fluorine refrigeration. People have made positive progress in the search for alternative refrigerants of Freon. Some experts and scholars pointed out that the better refrigerants to replace R22 are R407C, R410A and R32.

A comparative analysis of the advantages and disadvantages of ammonia and fluorine refrigerants from the characteristics of refrigerants and current application characteristics shows that ammonia refrigeration has better refrigeration performance, and the toxicity and danger of ammonia are what we have to consider, so we need to continue Research and improve the objective problems of ammonia refrigeration system. The better safety and simplicity of fluorine refrigeration is widely used in small and medium-sized cold storage, and there is also a trend toward large-scale development. However, the hazards of Freon to the atmospheric environment have to be paid attention to. Therefore, it is still to find more ideal refrigerants. The focus and direction of future research.